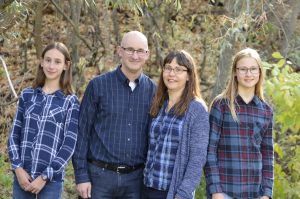 Patrick is an Alberta boy. He was born in Edmonton, raised in Wainwright, attended college in Camrose, and University in Lethbridge. It was in university that he made a commitment to follow Jesus Christ and became active in ministry in the years following his graduation. Patrick attended Edmonton Baptist Seminary (now Taylor Seminary) and served internships at Strathcona Baptist Church in Edmonton and First Baptist Church in Lethbridge. During his third year of seminary he accepted a call to pastor at Stettler Baptist Church. It was in Stettler that Patrick met Marion, who would become his wife! Two daughters, Rachel and Jalina, were born to Patrick and Marion during those years. After almost eight years in Stettler Patrick accepted a call to First Baptist Church in Camrose. During his years in Camrose he graduated with his Doctor of Ministry degree from Carey Theological College and was privileged to visit Israel twice! After five years in Camrose Patrick accepted the call to be the senior pastor at Heights Baptist Church in Medicine Hat. Patrick has a passion for Israel and a desire for Christians to understand the bible in its Jewish context.